Does greek yogurt cause hair loss?

Posted by Dr Larry Shapiro is the inventor of Help Hair Shake and Products for Fuller, Thicker Hair. on March 04, 2018 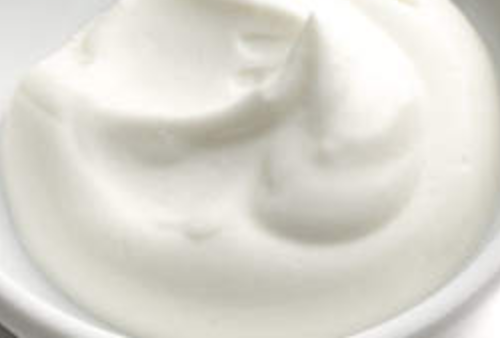 Does greek yogurt cause hair loss?

There are many different types of yogurt on the market. Greek yogurt has become popular, due to its creamy taste, but it has high-protein levels.

Greek yogurt has a high amount of protein (19 grams) per serving.

Now, most people would think protein like this would help your hair, but here's the problem. You take greek yogurt, your Help Hair Shake, plus an additional splash of milk, and get a lot of protein for a single serving all at once. 19g + 8g (Help Hair shake) + 8g (milk) equals a whopping 35 grams of protein per serving.This is way too much at once.

Greek yogurt is a milk product whcih has the highest bioavailability of any protein and absorption rate.

Plus greek yogurt is eaten all at once within minutes which has a bigger impact on our metabolism than imagined.

This interesting study shows that "chugging" whey protein isolate has a faster intake in the system.

OBJECTIVE: Our objective was to determine the effect of divergent aminoacidemia by manipulating ingestion patterns of whey protein alone on MPS and anabolic signaling after resistance exercise.

DESIGN:  In separate trials, 8 healthy men consumed whey protein either as a single bolus (BOLUS; 25-g dose) or as repeated, small, "pulsed" drinks (PULSE; ten 2.5-g drinks every 20 min) to mimic a more slowly digested protein. MPS and phosphorylation of signaling proteins involved in protein synthesis were measured at rest and after resistance exercise.RESULTS: BOLUS increased blood essential amino acid (EAA) concentrations above those of PULSE (162% compared with 53%, P < 0.001) 60 min after exercise, whereas PULSE resulted in a smaller but sustained increase in aminoacidemia that remained elevated above BOLUS amounts later (180-220 min after exercise, P < 0.05). Despite an identical net area under the EAA curve, MPS was elevated to a greater extent after BOLUS than after PULSE early (1-3 h: 95% compared with 42%) and later (3-5 h: 193% compared with 121%) (both P < 0.05). There were greater changes in the phosphorylation of the Akt-mammalian target of rapamycin pathway after BOLUS than after PULSE.

Which means that the rapid absorption of greek yogurt and the fact that is is eaten (drank) all at once would increase the absorption and "bolus effect " it has upon your system not to mention the the large amount of protein absorbed.

Whey protein isolate has BCCA which increase testosterone levels and free t which converts to DHT. Although we advocate for eating all proteins such as chicken, fish, steak since their absorption rate is more limited by the digestive track. The absorption of the muscles for recovery with WPI is much faster and so is greek yogurt since it is basically in a liquid form like WPI.
We have have seen several cases of hair loss from Greek yogurt.  Although it is very “healthy” is not necessarily good for hair growth when taken with the shake.

Or the Greek yogurt is consumed several times a day since it is fast acting and rapidly absorbed into the blood stream. 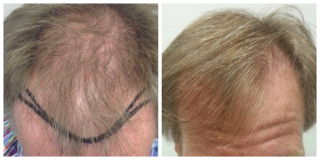 This patient had a transplant with our clinic and grew out within 6 months using Help Hair shake 1 scoop 2x daily.

He then decided to go on a high protein diet and take 2-4 greek yogurt daily while running 3-4 miles a day.

His existing not transplanted hair started to shed rapidly. He came in complaining of hair loss and his transplanted hair was also very thin looking. Once we realized that he was off the Low Anabolic Profile had gone "Anabolic" we immediately told him to stop the greek yogurt and restart help hair shake. After 3-4 months his hair was restored and we were able to reverse the shedding from the Greek Yogurt.

Identifying the cause of your hair loss early is important since this will impact your hair.

Our Help Hair Certified Clinics have been trained and they go the "extra mile" to give you the very best hair loss treatment plan.

To see a list of our Help Hair Clinics go to Help Hair Doctors.

We advised this patient that he was allowed to eat regular protein such as steak, chicken, fish so long as he did not use any other protein shakes or any more greek yogurt daily with our product.

That does not mean you should avoid yogurt with lower protein levels which we think will not adversely impact your hair. In fact yogurt with 8-10 grams per serving is probably good for digestion especially probiotics.

Although we would suggest not to take high protein yogurt with our product since too much fast acting protein at once will make you Anabolic.

Nor does it mean that the occasional use of greek yogurt ie 1-2 x a week as a snack is bad. But it means that using it daily with milk and our product may have an adverse impact on your hair. And we have had customers contact us with the same issues, who were using Greek yogurt 1-2 x daily with an adverse impact.

So we think that at if you are using Greek Yogurt on a daily basis especially if you are using it with our product than you should at least limit the use to 1-2x a week and see if there is marked improvement with your results. We suggest not to use it at the same time you drink our shake but to wait at least 7-10 hours later and again only a few days a week. It would probably be best to avoid it as much as possible while you are trying to restore your hair.

If you have had hair loss with greek yogurt or just realized Greek Yogurt is causing your hair loss please share your story with us at 561-420-2400.

If you are a Hair loss clinic and would like to be trained in the Low Anabolic Profile or how to use Help Hair products to get the best results for your patients please contact us.